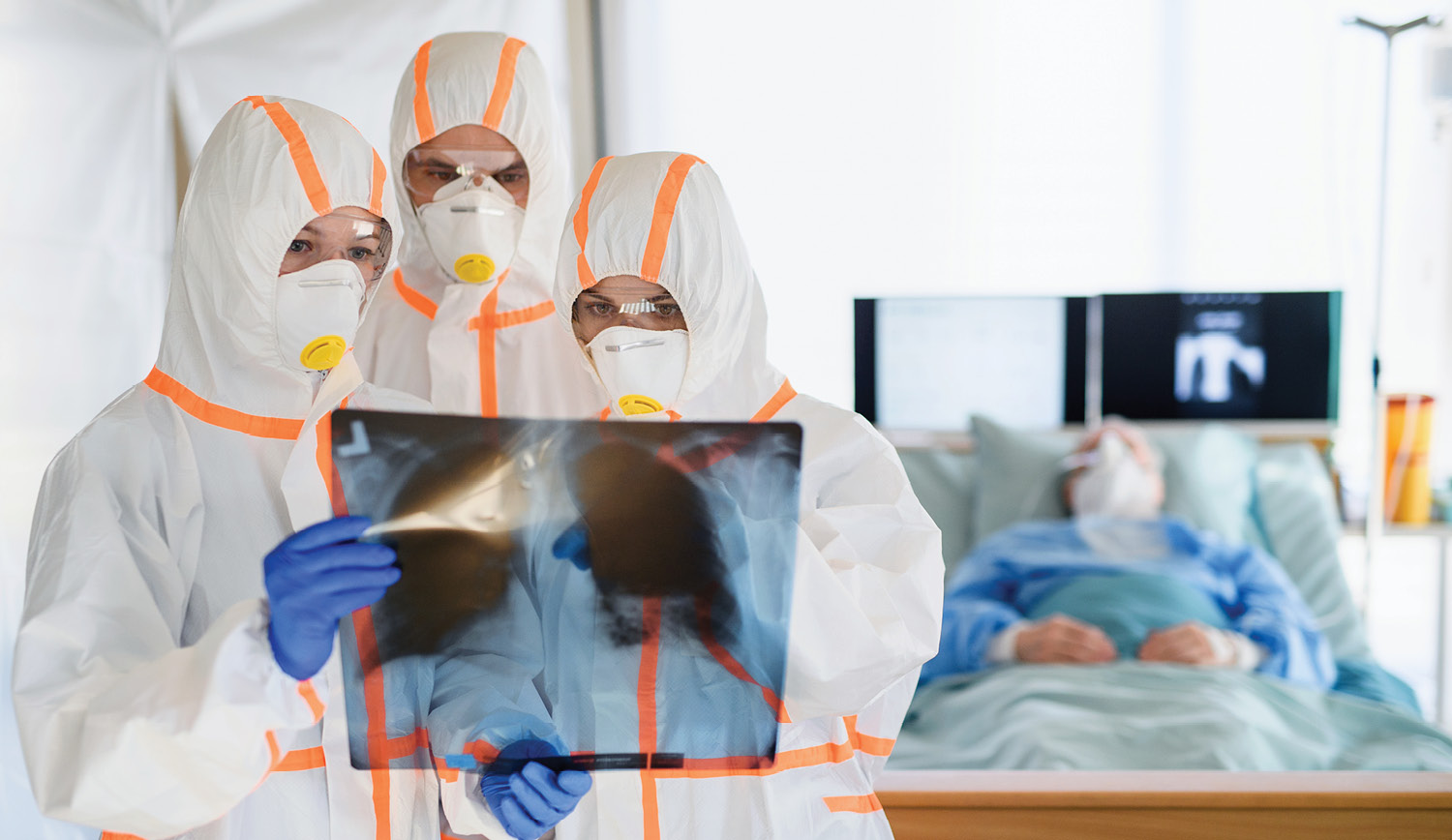 Why we’re not overreacting to the coronavirus, in one chart

By Kelsey Piper and Christina Animashau

The national mobilization against the Covid-19 coronavirus is now in full swing. Schools and workplaces nationwide have shuttered. The federal government has recommended that people not gather in groups of 10 or more. Social distancingand self-isolation are now becoming part of the fabric of daily American life.

This has all sparked a serious question among many people: Are we overreacting? It’s not just a question being asked by partiers and bar-goers — it has also been asked in the New York Times. A widely circulated article by Stanford’s John Ioannidis suggests that the stepped-up US response is a “fiasco in the making” that’s being made without enough data.

To someone who hasn’t been following the pandemic’s spread closely, the drastic measures indeed might seem like an overreaction. After all, around 13,000 cases and 200 deaths — as of Thursday — in a country of 330 million doesn’t seem that bad. Is it really worth shutting down the economy, a measure that will of course have horrific costs of its own, for such a small toll?

But the numbers mask what’s really causing experts to worry: The coronavirus’s trajectory is putting us on a course of many, many more cases and many, many more deaths unless we do something drastic.

In other words, there’s a simple answer to the question: No, we’re not overreacting.

To explain why we’re not overreacting, we need to look to the experience of another country going through the coronavirus crisis: Italy. Here’s a chart comparing the country’s cases to the US’s. 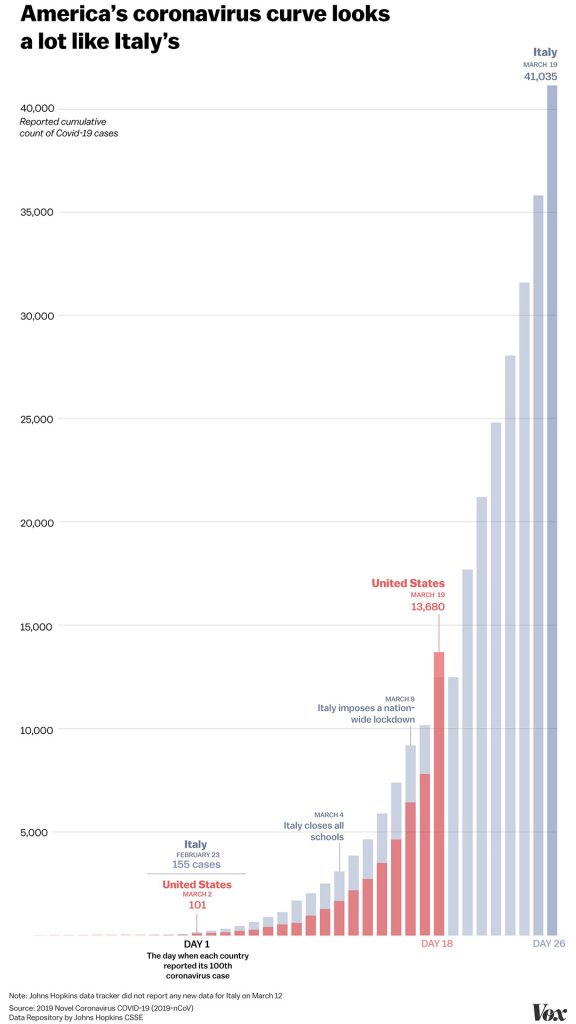 A couple of weeks ago, Italy was much like us, with 107 deaths on March 4. But things were already rapidly getting worse; by March 10, more than 600 people were dead, and today more than 3,400 are. That makes Italy the epicenter of coronavirus fatalities in the world, with more deaths than even China, where the outbreak started. Hospitals have been pushed to the breaking point, with doctors and nurses without adequate protective equipment collapsing at work and other doctors reporting that patients won’t all get lifesaving care because there isn’t enough of it to go around.

What’s scary about Italy’s experience is that Italy wasn’t exactly passive in its response to the virus. The country did act, quarantining a dozen towns in northern regions on February 23, urging the public to engage in social distancing, and ordering the closure of all schools nationwide on March 4.

But case numbers kept growing. On March 8, Italy locked down the north of the country, and on March 9 it extended the lockdown to the whole country. Now, it looks like these extreme efforts might have slowed the rate of growth of cases. On March 15, there were 3,590 new cases. On March 16, 3,233. On the 17th, 3,526. And on the 18th, 4,207. That’s not exponential growth, suggesting the lockdown really did help — but those still aren’t good numbers, especially when Italy’s hospitals are already overwhelmed.

Italy has been devastated by the virus because the action it took was just a little too moderate, a little too restrained, and a little too slow. The country took measures that were substantial and costly but nonetheless insufficient to actually bring the epidemic to a halt. (This was the message hammered home in a recent project where Italians sent video messages to themselves 10 days ago.)

There’s some reason to think we won’t be hit as hard as Italy. Italy’s population is older than ours, and older people are hit hardest by the virus. Smoking might affect death tolls, too, and smoking is more common in Europe than in the US. Because the United States is bigger, US reported cases per capita are a little further behind Italy’s than the raw confirmed case numbers are. And comparing confirmed cases across countries is difficult anyway, because most countries are undertesting and it’s hard to be sure who is undertesting more.

But the bottom line remains that there’s no real reason to think that measures that didn’t suffice in Italy will suffice here.

The lesson from Italy isn’t just that you have to act before your hospitals are overwhelmed. It’s that you have to take steps that appear in the moment to be an exceptional overreaction — because by the time it looks like the steps you’re taking are appropriate, it will have been too late.

One chart that should worry Americans

Now, when public health experts say the US is on Italy’s trajectory, what exactly does that mean?

It means that the US and most European countries are seeing early coronavirus growth numbers that look like the ones from Italy. Our confirmed cases are increasing at about the rate theirs did. That gives us every reason to think our health systems will eventually be overwhelmed like theirs were, unless we take strong measures sooner than they did.

So far, we’ve taken some strong measures — which is good! But it’s not clear that we’re acting that much faster than Italy did — and remember, Italy wasn’t fast enough.

The frightening chart above compares the US’s reactions to Italy’s. It shows confirmed case numbers in Italy and in the US, starting on the day when each country passed 100 confirmed cases. It shows the points at which Italy took various precautionary measures. To break away from Italy’s trajectory, we need to take measures that are stronger than the ones it took, or take measures sooner on the trajectory than it did.

The US passed the 13,000 confirmed case mark on Thursday. Italy locked down the northern half of the country on the day it reached 13,000 cases and extended the lockdown to the southern half one day later.

To be sure, there are a lot of problems with using confirmed case data for these trajectory estimates. Italy is likely substantially undertesting, as is the US. Confirmed cases are a poor reflection of overall cases. Sometimes, growth in confirmed cases is due to increases in testing capacity, not increases in the virus’s spread.

But even with those caveats, confirmed case data isn’t worthless. “They lag behind reality,” Dr. Caitlin Rivers at Johns Hopkins University told me on Monday, but they’re still our best window into what is going on.

And looking through that window, the picture looks bleak for the US. Taking the drastic steps some parts of the country are now taking, like the California stay-at-home order, gives us a chance — not a guarantee, to be clear — to veer from the Italian trajectory.

“You are always behind where you think you are”

In a press conference on March 16, the National Institutes of Health’s Dr. Anthony Fauci, who has played a major role in leading the US response, explained to Americans why the strong measures the government was taking were not an overreaction.

“Some will look and say, well, maybe we’ve gone a little bit too far,” he said. “The thing that I want to reemphasize, and I’ll say it over and over again, when you’re dealing with an emerging infectious diseases outbreak, you are always behind where you think you are if you think that today reflects where you really are.”

Let’s say that today we found 1,000 new Covid-19 cases. Keep in mind that the virus has atwo- to 10-day incubation period. In the past week or so, each of those people was exposed to the virus. Then they got sick. Then they got sick enough to seek medical attention, which can take a few more days. Then they got a test. Then the test took a day or more to return positive results (some people are reporting longer waits than that for results, while some newly designed tests might be able to get results faster).

Each of those positive tests, then, reflects an infection up to two weeks ago. The situation has already worsened for the two weeks or so since those new cases were infected. For much of that time, those 1,000 people have been out and about in the world, potentially infecting others. In a population not taking strong social distancing measures, it is estimated that on average they will have infected two or three others. Some of those newly infected will themselves have started infecting others.

Italy took strong measures. Its mistake was not that it didn’t react at all — it’s that it kept being a little bit behind the ball. Each measure was appropriate to the situation the Italians observed. But the real situation was always much worse. So things kept worsening until they pulled out all the stops with a countrywide lockdown.

“It will always seem that the best way to address [the virus] would be to be doing something that looks like it might be an overreaction,” Fauci said. “It isn’t an overreaction. It’s reaction we feel is commensurate [with what] is actually going on in reality.”

To break away from Italy’s trajectory, we have to respond with stronger measures than Italy. We have to respond in ways that feel like an overreaction. In the past few days, we’ve seen the first US steps that are stronger than Italy’s responses at a similar point in the outbreak — steps like the Bay Area’s shelter-in-place order, the follow-up extending it to all of California, New York’s similar order Friday, and state orders shutting down restaurants and bars. That’s what it will take to give ourselves a chance at a different curve.