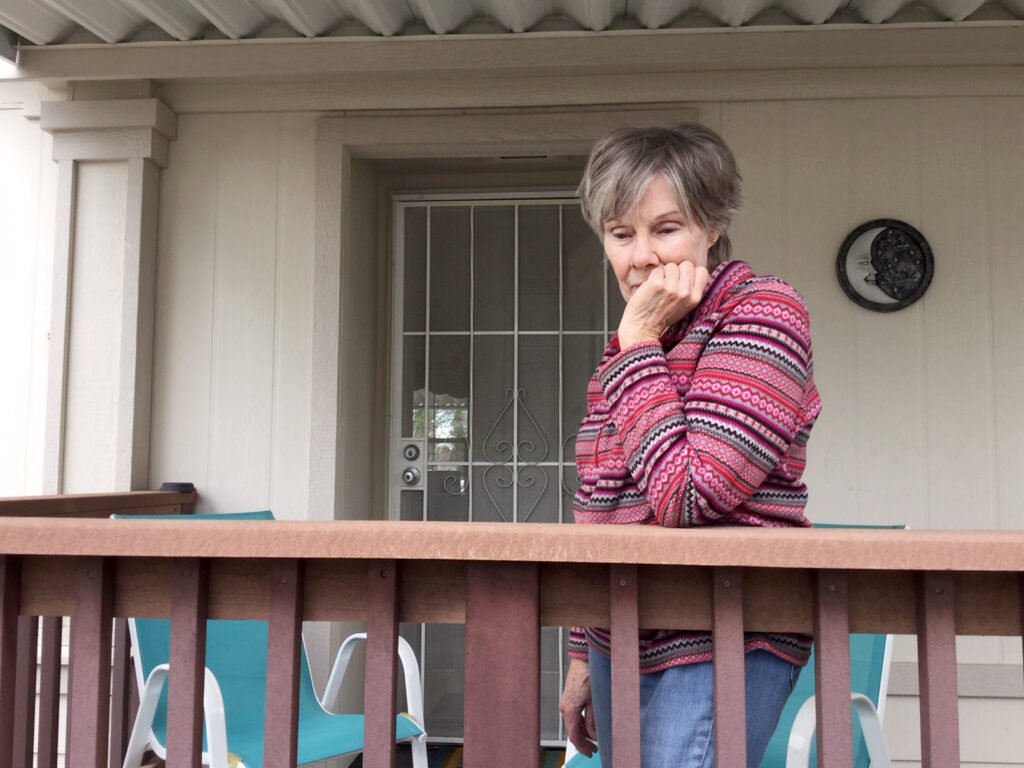 “These people are just barely making it on Social Security or a pension and then they get squeezed and pushed out.” — Frank Porter, vice chair of the Housing El Dorado Board of Directors

People often buy a mobile home if they are downsizing or because it’s usually a less expensive way to live. This is especially true for seniors or those with modest incomes.

That option may be ending for many as advocates say mobile home parks are becoming easy prey for investors hoping to make a quick buck.

Three county mobile home parks were recently sold to private equity investors who quickly raised space rents so high or made other changes that it may eventually force some from their homes, according to Tamara Janies, chair of the El Dorado Mobilehome Owners Coalition. “ (They’re) going after the most vulnerable people there are and then sending them to the streets,” she said.

Frank Porter, who is working with Janies on local housing issues as a member of the nonprofit Housing El Dorado, pointed out what is happening in El Dorado County is happening around the state. “I’m concerned it will worsen homelessness,” he said. “People are just basically making it and then something happens — an unexpected expense comes along or they lose a job and all of a sudden they can’t make their space rent and are evicted.”

In other cases, people buy a mobile home as part of their retirement plan, said Porter, only to find those plans thrown out of whack by an acceleration in rents. “These people are just barely making it on social security or a pension and then they get squeezed and pushed out,” he said. “So there is a need for some kind of protective ordinance.”

Janies said El Dorado County currently has about 55 mobile home parks, including those in South Lake Tahoe, which amount to about 4,300 spaces and 4,000 residents. These parks fill a need for affordable housing for retirees with Janies estimating 50% of those living in mobile homes are on fixed incomes.

Two people who have made a fortune from it and teach others how to do the same are Frank Rolfe and Dave Reynolds, who own more than 250 communities across the Great Plains and Midwest and run Mobile Home University. The company’s website touts the two as the fifth largest mobile home park owners in the U.S. with more than $500 million in assets.

TV comedian John Oliver, who hosts “Last Week Tonight,” catches Rolfe on camera during one of his seminars at MHU saying, “The customers are stuck there. They don’t have any option. They can’t afford to move the trailer. So the only way they can object to your rent raise is to walk off and leave the trailer, in which case it becomes abandoned property and you recycle it — put another person in it. So you really hold all the cards … So the question is how high do you want to go?”

Janies and Porter pointed out renting a space in a park is different from renting a home or apartment in that while people own the mobile home, they don’t own the land so it’s not easy to leave as it can cost $10,000 to $20,000 to move the unit and the home can sustain damage in the process.

Because of that there are cases where people just walk away from their mobile home because they can’t afford the rent and can’t afford to relocate the home. The park owner then takes the unit and renovates or replaces it to rent or sell.

Mobile home owners are also sometimes intimidated into signing long-term leases, according to Janies, with the threat being if they don’t their rent will be raised every 90 days.

Staven Noble is 72 years old and has lived in his El Dorado Hills mobile home park for 13 years. With space rents going up every year, he worried in a year or two he won’t be able to afford to live there. “I may have to move out of state or live in an RV,” he said.

Previously his said his park was owned by a man who got older and wanted to sell. Without informing the tenants, in stepped a limited liability corporation that bought the park as an investment, according to Noble. It’s a scenario Noble said is becoming increasingly familiar as LLCs and private equity firms see these parks as an easy way to make money.

“I did a survey at this park and almost all of them are people working part- or full-time and couldn’t afford the potential for rent increases, which indicates these people are the working poor and middle classes and can’t keep pace with the increases,” said Noble.

In other cases, the LLC raises the rent and excludes the utilities so residents have to pay separately for them.

Sunset Estates is the only mobile home park in El Dorado Hills; it’s owned by Utah-based Investment Property Group, which has in its portfolio some 100 manufactured home communities and RV parks in California, Colorado, Idaho, Minnesota, Oregon, Utah and Washington, according to its website.

The Mountain Democrat called IPG’s Irvine offices for comment on why rents have been increased but that call was not returned by press time.

Despite not seeing a future in staying in California, Noble said he plans to work with District 1 Supervisor John Hidahl on a rent stabilization ordinance.

Another mobile home owner with similar complaints is Jeff Myler, 57, who lives in a park in Pollock Pines. A veteran of Desert Storm, he said he is 70% disabled but still works part-time as a painting contractor. “I’m paying $650 now and it’s going to $700 in March,” he said, adding some utility costs are included.

“I’m worried about others who can’t work,” Myler said, explaining that the pandemic has further curtailed people’s chances to earn a little extra money on the side. Myler said he has to pay 5% more every year in rent according to a 20-year contract he was forced to sign. He said he was told if he didn’t sign the contract he’d have to pay 10% more every year in rent. He said he’s also paying for a loan on his mobile home at 9.75% interest.

Most people in the park are retired and were forced to sign a contract too, he said. Between space rent, the mortgage on his unit, the utilities he does have to pay and the rent on his storage shed, Myler said it takes up his entire disability check of $1,346 a month, although he’s working to get his pay increased.

Retiree Kathy Kniffen, 71, lives in a Diamond Springs mobile home park. “I moved there because it was affordable,” she said. “But it’s become less affordable. 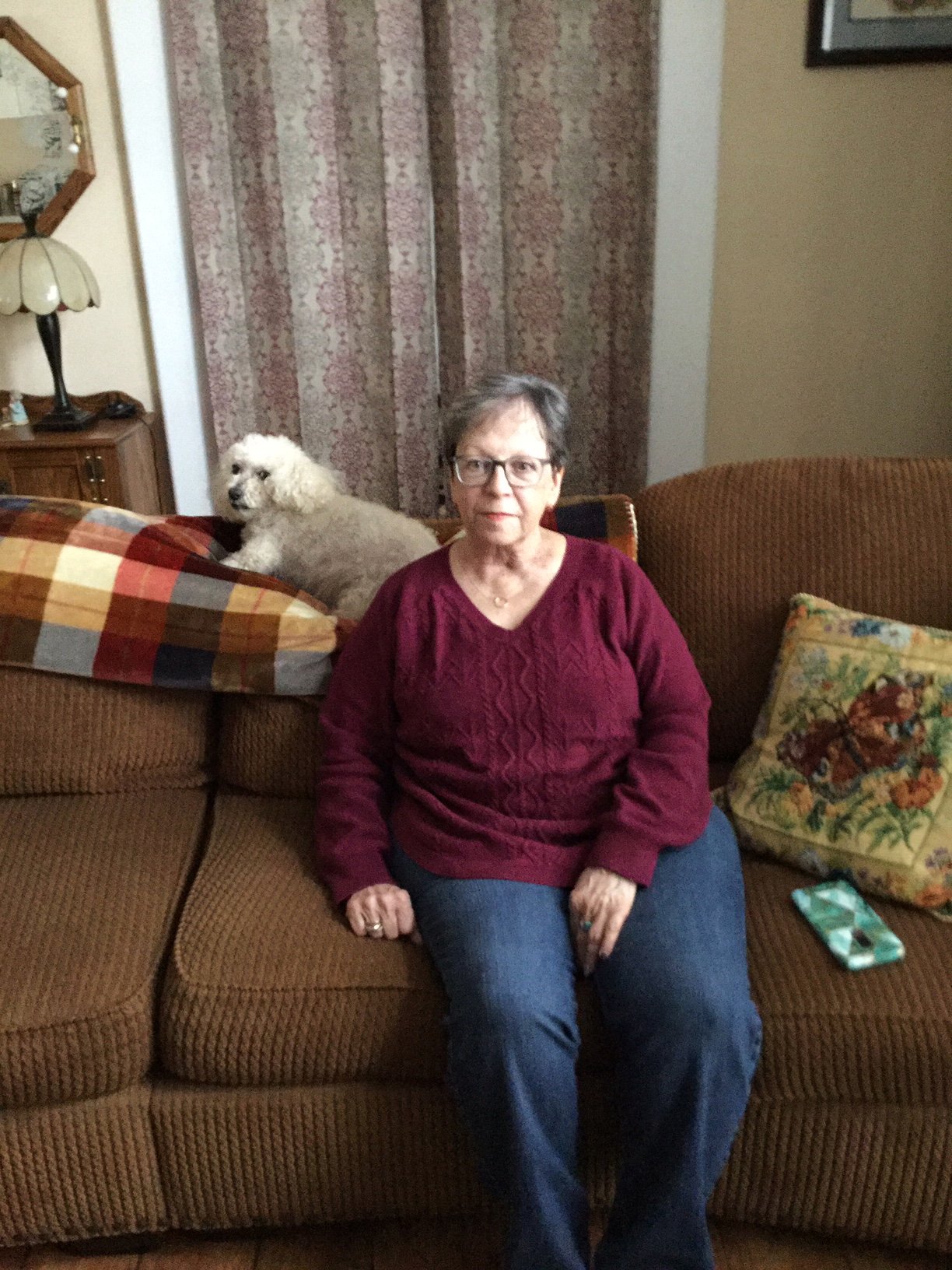 Kathy Kniffen, 71, moved to Diamond Springs Mobile Home Park because of its affordability. But it’s become less so since she said her park was bought by a property investment group. She and others in the park actually tried to buy it when it came up for sale a few years ago but lost out when they couldn’t come up with a deposit. Mountain Democrat photo by Dawn Hodson

“At first it was a mom-and-pop operation but the owner died and then it was sold to an LLC in 2018.” She said she doesn’t know the owners but they are registered in Delaware. Her rent when she moved in 10 years ago was $490, including utilities. Now she pays $640 plus utilities so it’s more than $700 a month. She said she didn’t have to sign a long-term lease or contract because she was there before the park changed hands but new residents have to sign a one-year lease and are paying $850 a month in rent plus utilities.

Kniffen said when she and others learned the park was up for sale, they tried to buy it as a group, offering them full price.

The homeowners association had a lawyer and consultant helping them but the owner wanted a $300,000 non-refundable deposit in addition to $13.5 million for the park, Kniffen said, but there was no way to give him a deposit since they were still in the process of trying to get everyone together to make the purchase.

Kniffen said if the previous owner had taken their offer he would have had three years to claim capital gains, which is an incentive for owners to sell to homeowner associations.

“Eventually I will have to move when the rent goes to half of my income,” she said. “I won’t move the unit because it would cost $20,000 and then there would be no place to move it to. Other parks don’t take in old units. They put in new units. When the rent goes up, the resale value of the home goes down. Unfortunately we’re losing our low-income housing in this county.”

Three residents walked away from their mobile homes at the park, according to Kniffen.

“The county needs to protect mobile homes as low-income housing because you don’t want seniors on the street. You don’t want to add to the homelessness problem,” she said, with one suggestion being that park owners receive a tax write-off in order to keep rent rates reasonable. 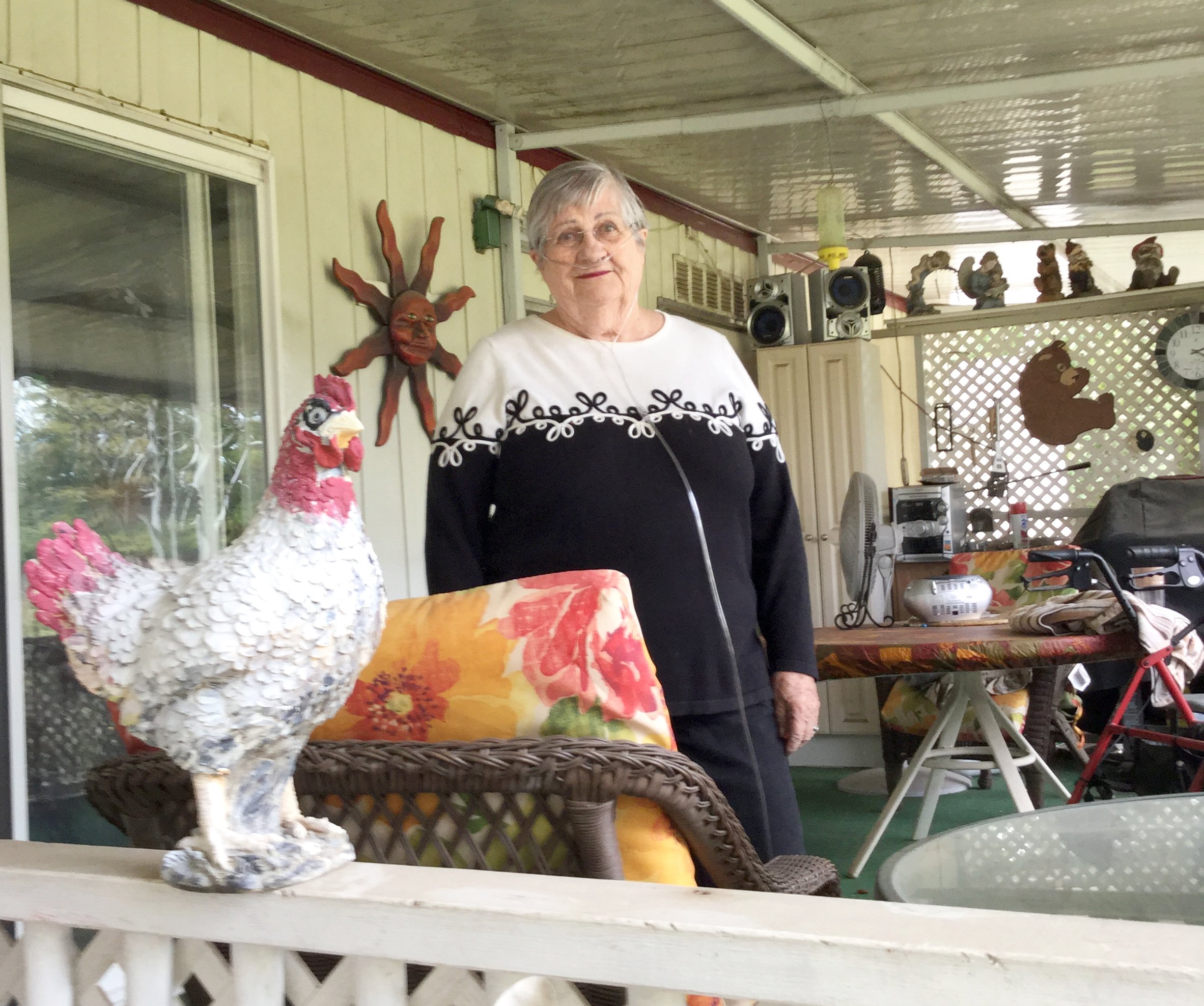 Sally Franklin, 88, has lived in the Diamond Springs Mobile Home Park for 16 years with her husband. Franklin is living on a fixed income while the space rent continues to climb. Mountain Democrat photo by Dawn Hodson