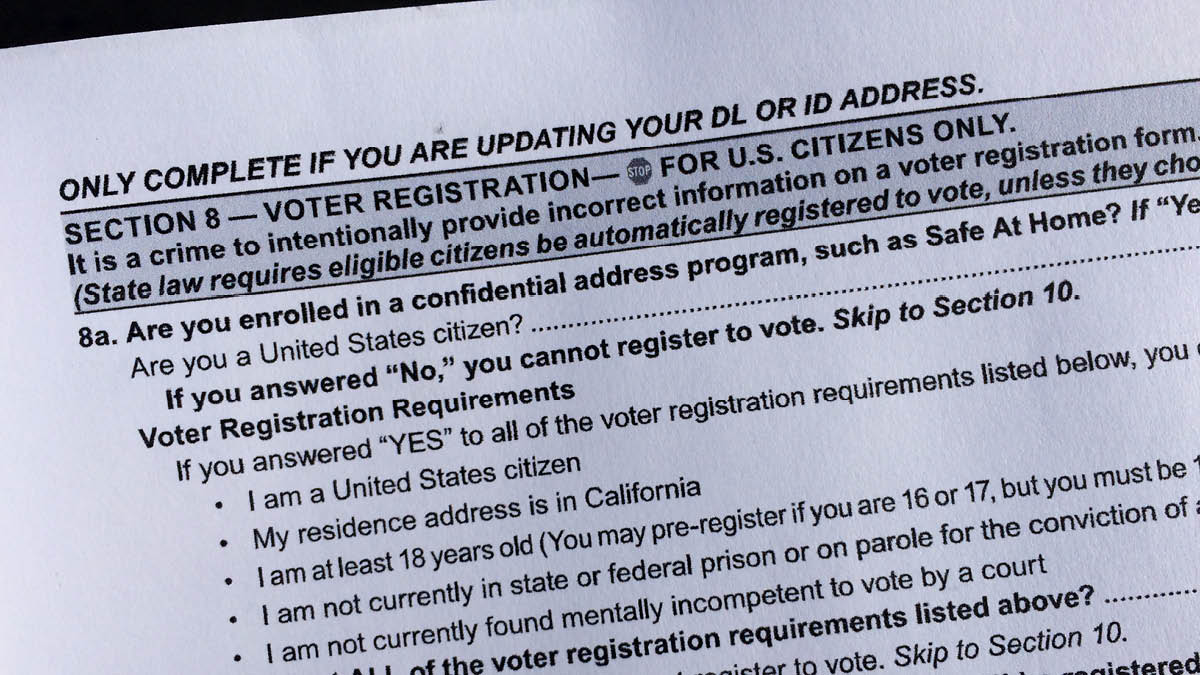 REPORTING FROM SACRAMENTO —  Although Californians now register to vote in more places than ever, most still rely on something that’s been around for generations and is increasingly seen as imperfect: the voter registration card.

“I think that it is confusing and somewhat misleading,” said Kim Alexander, president of the nonpartisan California Voter Foundation.

Most of the card is straightforward — name, address, date of birth — but one key section requires both close inspection and careful interpretation. There, voters choose whether to join a political party, the equivalent of an electoral fingerprint used extensively by candidates and campaigns.

The problem arises when someone who identifies as “independent” looks for a box to check. There isn’t one.

A Times investigation found widespread confusion among California voters who choose the American Independent Party, an ultra-conservative organization that’s been largely invisible from most campaigns. A poll of AIP voters found 73% mistakenly thought they were “independent” of all parties. Those voters should have chosen the “no party preference” option.

Though the AIP name alone may be confusing “When they use the word ‘independent,’ I want to clarify it,” said Cathy Darling Allen, Shasta County’s registrar of voters.

She and elections officials in other counties said voters routinely ask in-person questions about how to navigate the various choices. But for those who fill the cards out on their own, there’s no help.

The Times analysis of registration records from American Independent Party members finds a higher percentage of forms that were mailed in rather than filled out at an elections office or other state office. That lack of one-on-one voter education could be telling.

Most voters who wish to be political free agents successfully navigate the choices. Secretary of State Alex Padilla said in an interview that elections officials are limited by what the law spells out, and they “cannot assume a voter was misinformed in checking that box” for the American Independent Party.

The question on the form asking about joining a political party has been reworded three times in the last nine years. Only one of those redesign efforts, in 2008, was done with an eye toward clarity.

Alexander, who served on the task force that revamped the language that year, said the change was designed to help the growing number of voters who now want to be unaffiliated with political parties.

“We wanted to make sure voters understood their choices,” she said. “We agonized over every single change.”

The result was a voter registration card that asked the question in plain language: “Do you want to register with a political party?”

A news release from then-Secretary of State Debra Bowen at the time specifically said the new language was crafted to correct the mistake of hopeful “independent” voters who had chosen the American Independent Party. Her statement called the new voter registration card “intuitive.”

It also turned out to be short-lived.

The simpler language was scrapped in the wake of Proposition 14, the 2010 voter-approved measure that created California’s top-two primary system. Placed on the ballot as part of a late-night budget deal in the Legislature, Prop. 14 required several changes to state election law. And in that batch of odds and ends were changes to the voter registration card.

No longer were voters asked if they wanted to register with a party. The question now reads: “Do you want to disclose a party preference?”

Alexander was more blunt. “Nowhere else is this language used,” she said.

AIP voters who only learned of their party registration by participating in the poll conducted for The Times generally expressed confusion over the terminology.

Shawn Vasquez, a Costa Mesa clothing designer who did not want to be a member of the American Independent Party, suggested the “no party preference” label was unfair.

“It makes you seem like a disengaged voter,” said Vasquez, 29. “I clearly have strong beliefs and strong values. But I can’t see myself identifying with one party.”

Elections officials say mistakes with voter registration are best corrected with outreach programs, and the most comprehensive change may be through legislation.

“I am interested in taking a look at that,” said Assemblyman Kevin Mullin (D-South San Francisco), when asked about the voter registration form. “The language, I would say, ought to be reviewed.”